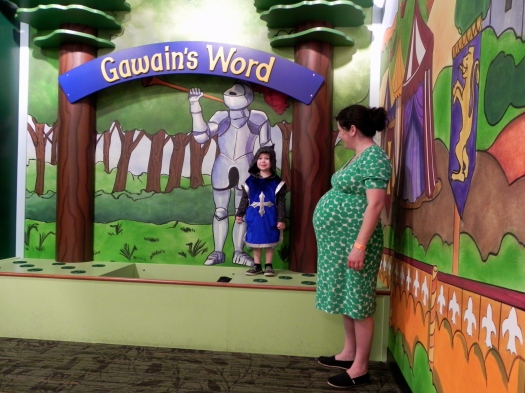 So, that picture is really from 27 weeks, which I count as the last week of my second trimester, but really it is close enough. I’m into my last trimester with this baby! Yay! Not that I’ve been rushing through this pregnancy, but all good things must come to an end. And I won’t lie, I’ve been pretty uncomfortable lately.

Thanks to Spinning Babies, Charlie is head down! At 20 weeks, he was breech. At 24 weeks, he was transverse. At 28 weeks, he is vertex. I know, it is early to even be concerned about, but with my wonky uterus, I tend to worry early since the baby gets stuck in his position early. I’ve been reading up on Spinning Babies and doing the exercises and the postural suggestions. The Pastor thought I was crazy, but Charlie is head down! Apparently I’m not crazy. Hopefully the hip circle mocking will now stop, since I’ve proved it was worth it. I’m pretty excited about him being head down. My c-section with Aidan was because he was breech (and I was with a doctor who didn’t have the skills to deliver a breech vaginally). With Emery, I had an early external version at 25 weeks and he stayed head down from that point on. So, I’m hoping (and reasonably expecting) that Charlie will stay put as well. If you are pregnant, you should check out Spinning Babies to get baby in the best position for birth.

I had to go to Labor and Delivery at 27 weeks. Yeah, I know, I didn’t tell anyone about my little visit to the hospital. I tend to have lots and lots of Braxton Hicks while pregnant. So, I keep an eye on them and call the doctor if they get out of hand. At 27 weeks, they got a little out of hand. I managed to get them back under control, only they were still coming every two to three an hour and they were accompanied by back pain and pelvic pressure. So, I went in just to make sure things were alright. (I fully expected that everything was fine, but it is sometime prudent to check out such things just in case. And The Pastor was freaking out. You’d think he had never gone through any of this before.) They hooked me up to the monitors and did an FFN. The contractions were fizzling out and the FFN was negative. Turns out, the pelvic pressure is because he is head down and very low. No cervical changes or anything, so all is well. We’ve also decided not to keep repeating the FFNs. I am pretty confident that I’m fine and am not concerned enough to need the reassurance of biweekly FFNs. (Women in other circumstances may need them, but in my case, I don’t.) The annoying part of my visit to Labor and Delivery was with the lady checking me in. First, she asked me why I was coming in today. Um… hello! Because I’m having contractions. Then, she asked me my due date. I tell her July 3rd. She then looks at me, looks at my belly, looks back at my face and asks, “Is it twins?” She was super excited at that prospect. I quickly informed her that there was only one in there. She didn’t look convinced, but luckily didn’t have the nerve to press it.

In 3 weeks, I’ll be getting steroid injections for baby Charlie’s lungs. Since all my boys have had NICU stays with breathing problems, we’re going the steroid route to try and avoid another NICU stay. Baby Charlie is, in fact, a boy. We got that verified at my appointment this week. We are hoping the steroids will help his lungs mature. I told The Pastor that I would now carry him to 39 weeks because I prepared for an early delivery. That is how these things works, right?

We are still working on a name for Charlie. No, we are not naming him Charlie. It isn’t even in the running. We’re getting closer to a real name, I think. Hopefully we’ll have something to announce in the next week or two in that department. Imogene is voting we name him Leo. She says that is just the most perfect boy name. Luckily we don’t let our kids name their siblings. I told her when she’s having a baby, she can name him whatever she wants.

The pastor's wife is the homeschooling, crafty, reading, singing mama bear of eight awesome kids! She also writes a weekly column about being faithful families at JCWCenter.org.

The three little sisters. They’re turning us back into a girl household. #largefamily #youngestsiblings #sisters
Juniper is 2 months old! She’s up to 13.5 pounds. She still hates the car, but is slowly getting better about it. #babynine
Two teens with driving permits!
Juniper (8 weeks) started cooing a couple weeks ago. Now she’s always “talking” to us. As Sue Ellen says, she is so precious! #babynine
Little Sister Club.