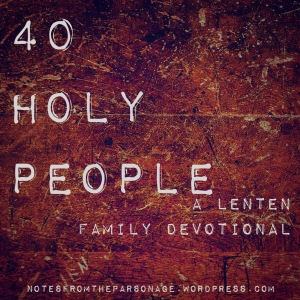 Day 11: Fanny Crosby — Using What I Have for God 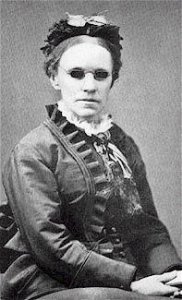 Fanny Crosby was born is 1820. Either she was blind from birth or she lost her sight shortly after.

At the age of eight, Fanny wrote her first poem. She was raised in a Christian home and by the age of fifteen had memorized the four Gospels, the Pentateuch, the book of Proverbs, the Song of Solomon, and many of the Psalms. She also learned to play the piano, organ, harp, and guitar.

In 1843, Fanny became the first woman to formally address the United States Senate. She advocated for the education of the blind.

By the time she died in 1915, Fanny had written almost 9,000 hymns. Her goal was to win people to Christ through her songs. During the time of her hymn-writing, She lived in areas where she could help the poor and immigrants and was said to give away most of her money as soon as she got it. She kept only the money to pay for her basic necessities and gave away the rest to the poor around her.  Though she was blind, she used everything she had to point others to Jesus, whether in giving her money or time to help the poor or using her talents to write songs.

What do you do for God with what you have?

What could you do for others with what you have?

Activity: Listen to or sing one of Fanny’s hymns. (e.g., “All the Way My Savior Leads Me”, “Blessed Assurance”, “I Am Thine, O Lord”, “Jesus Is Tenderly Calling You Home”, “Near the Cross”, “Redeemed, How I Love to Proclaim It!”, “Rescue the Perishing”, “Take the World, but Give Me Jesus”, etc.)

“Blessed Assurance” sheet music — You can print this out for your kids to see what a hymn looks like in a hymnal. (Not all churches still have hymnals.) 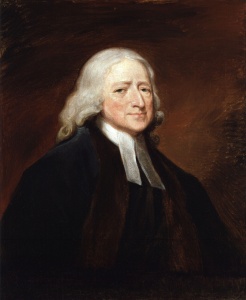 Born in 1703, John Wesley was the fifteenth child (of nineteen). His mother, Susanna, taught the children to read, speak Latin and Greek, and memorize much of the New Testament. His mother was very devoted to helping her children develop a relationship with God.

In 1735, John and his brother Charles made the trip from their home in England to Savannah, Georgia. He spent a few years in Georgia as Savannah’s parish priest, gathered together many holy men and women, and grew the congregation.

Upon returning to England, Wesley began “taking church” to the people. He would preach in streets and where people were instead of waiting for them to come to church. He felt the need to go out and meet those who didn’t know God and introduce them. He travelled on horseback, preaching two or three times a day. (To preach means to proclaim the Gospel, to tell people about Jesus.) Like Fanny, Wesley gave most of his money to the poor, keeping only what was necessary to meet his basic needs. He wrote books, peached sermons, met people where they were, and taught them about God and how to live a holy life.

Day 13: Helen Roseveare — Do Something for God 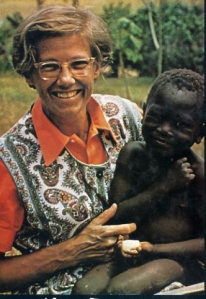 Helen Roseveare was born in England in 1925. As a child in Sunday School, she first felt she might be called to live on a foreign mission field. Her father thought highly of education, and Helen became a doctor. She still felt called to missions while in school and said, “I’ll go anywhere God wants me to, whatever the cost.”

After six and half years of medical school, six months in a missionary training center, and six months in Belgium studying French and tropical medicine, she went on a five-week trip to the Congo before she finally found herself where God was calling her. She was the only doctor for 2.5 million people. She began her work in a mud and thatch hospital while she built the building she needed and learned to speak Swahili. In eleven years, she had a 100-bed hospital and maternity complex and saved thousands of lives.

In 1964, Helen was taken as a prisoner of rebel forces in the area and endured beatings and torture. Once released, she returned to England to tell the people there that God’s grace had been sufficient during her time as a prisoner. She returned to the Congo in 1966 and continued her work helping the sick and injured until 1973. Helen is still alive today, writing books and encouraging people to be the hands of Jesus and do something for God.

“If I truly believe in Him, I’ll trust Him to desire for me that which is for my highest good and to have planned for its fulfillment.”

“It would seem that God had merely asked me to give Him my mind, my training, the ability that He has given me; to serve Him unquestioningly; and to leave with Him the consequences….How wonderful God is, and how foolish we are to argue with Him and not to trust Him wholly in every situation as we seek to serve Him!”

What do you think you could do for God now?

Use this map to color and find the Congo on the map. 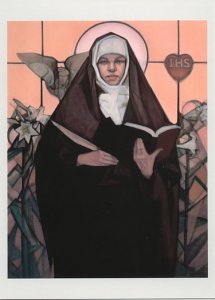 Teresa of Avila lived during the 1500s. (1515-1582, to be exact.) She lived in Spain and grew up in a family who converted to Christianity from Judaism. Teresa became a Carmelite nun early in adulthood. These nuns were devoted to prayer, though they were pretty lax about it when Teresa joined. Teresa worked to reform and strengthen her Cloister. (A cloister is a group of people living in a place of seclusion, much like a monastery.)

Teresa sought a deeper relationship with God through prayer and encouraged those around her to do the same. She had many visions during her quiet time with God. One of her visions was that of a castle. She described the spiritual life as walking through a castle, getting closer and closer to Christ who awaits us at the center.

“Let nothing disturb you.
Let nothing make you afraid.
All things are passing.
God alone never changes.
Patience gains all things.
If you have God you will want for nothing.
God alone suffices.”

Day 15: Samuel Kaboo Morris — A Prince with a Mission 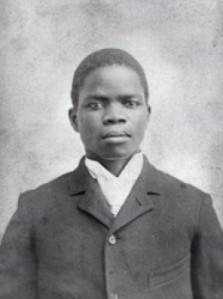 Samuel Kaboo was born in Liberia in 1873 as a prince among his tribe. When he was fourteen, he became a Christian; during that same year, he was captured by a neighboring tribe. He was beaten daily and was used as ransom to get his tribe to bring riches to his captors. One night, Kaboo saw a flash, and a voice told him to flee. His ropes fell off, he felt strong, and he ran off into the jungle, where he wandered for several days. He finally found a plantation and stayed there to work.

Samuel later felt called to America to learn more about God. He met a missionary who told him all she knew. He asked the missionary who taught her, and she gave him the name Stephen Merritt. Samuel walked to the shore and prayed that God would send a ship to take him to America. He eventually saw a trade ship and asked the captain to take him to America. The captain said, “No.” However, several of the workers on the ship ran away, so the captain asked Samuel to come on board to work. When he first boarded the ship, the other sailors abused him and made fun of Samuel, but by the time they reached America, they were all praying and singing hymns together.

In America, he found Stephen Merritt, who then asked Samuel to wait for him at his mission. When Mr. Merritt returned, he found that Samuel had begun a prayer meeting and had lead almost twenty men to Christ. He met many people and showed love and passion for Christ.

Samuel was used by God to draw many people to the Lord. While he attended school, many students came to pray with him. People from around the world would come to hear him speak. He inspired people to simply do something for God.

Samuel wanted to go back to Liberia and tell the people there about Jesus, but when he was twenty, he developed pneumonia. He prayed for God to heal him, but God told him that his work was done and that it was time to come home. Though other students encouraged him to pray and said that he needed to get better so that he could go back to Liberia and spread the Gospel, Samuel replied, “It is not my work… It is His. I have finished my job. He will send others better than I to do the work in Africa.”

After his death, many of his fellow students felt God calling them to go to Africa to be missionaries. Today, 85.6% of Liberians are Christian.

Do you pray for your neighbors? Your city? Your country?

Do you think God is calling you to share Him with your neighbors?

Use this map of Africa to color and find Liberia.

At first, Perpetua was held under house-arrest. She was baptized in the house while under arrest. She and her fellow Christians were then moved to a prison and locked in a dungeon. She was eventually moved to a better part of the prison where she could receive visitors. Perpetua was sentenced to death in an amphitheater. She told those with her, “You must all stand fast in the faith and love of one another, and do not be weakened by what we have gone through.”

Before her death, Perpetua asked God for a vision, showing if she would be condemned or freed. Perpetua received this vision from God: She saw a narrow ladder reaching to heaven, but only one person could climb up at a time. She saw a garden with a man dressed as a shepherd at the top of the ladder. Around the shepherd were thousands of people dressed in white. When the shepherd looked up and saw her, he said, “I am glad you have come my child.”

Perpetua and another young woman who was martyred with her, Felicitas, are recognized as Saints by many Christian traditions.